Mar23 Comments Off on What’s Coming in Joomla 4.0?

Joomla 4 is firmly expected to become a best generation ever, intending to bring simplicity for user experience and code quality for developers. This time is to get rid of the old style of previous versions, built with modern technology to make outstanding improvements like an one-click upgrade in core, minimal backwards compatibility breaks for the current extensions.

​To meet the demand of many users, this transformation is concerned as inevitable breakthrough to create new look and new features, supporting developers to do more things in their future project. In this article, we just list out some highlights in upcoming Joomla 4. There are more awesome features waiting for you in stable version. Let’s stay tuned to get it.

PHP 7 will be mandatory for Joomla 4.0

The most earth-shattering change with Joomla 4.0 is the requirement of PHP 7.

It is predicted that when J4 is released, the oldest supported PHP version will have less than one year of remaining security support. Also, the statistics show a very encouraging increase of PHP 7 adoption currently which is also a nail to the coffin of PHP 5’s support.

We believe that this decision is correct and we fully support it. Joomla 4 is a major version which will be around for at least another 5 years before the next one comes along. The Joomla! Project is in a position to push the technology forward and these decisions should be encouraged.

The Highlights of Joomla 4

Obviously Joomla 4 is still in development and there isn’t a definite catalog of what we will end up having once it’s complete.

However, there is already an Alpha version available to serve as a testing ground for both current contributors/testers and Joomla Extension Developers to test the waters with what they will need to change, if any, for their products.

Let’s take a look at all the goodies that Joomla 4 will bring along!

The Joomla 4.0 will have a fair number of refactored libraries, deprecations, removals and so on. It is a requirement to adopt to the latest PHP Standards.

For instance, currently, the following two packages are completely removed from the Joomla! Framework

Especially for the logging library, you could use any PSR-3 compatible logging package instead.

All the breaks and upgrade guides will be documented in the Joomla! Framework website.

With the latest Alpha release we were able to secure a few screenshots of the new and improved Backend along with the new default frontend named “Cassiopeia”. 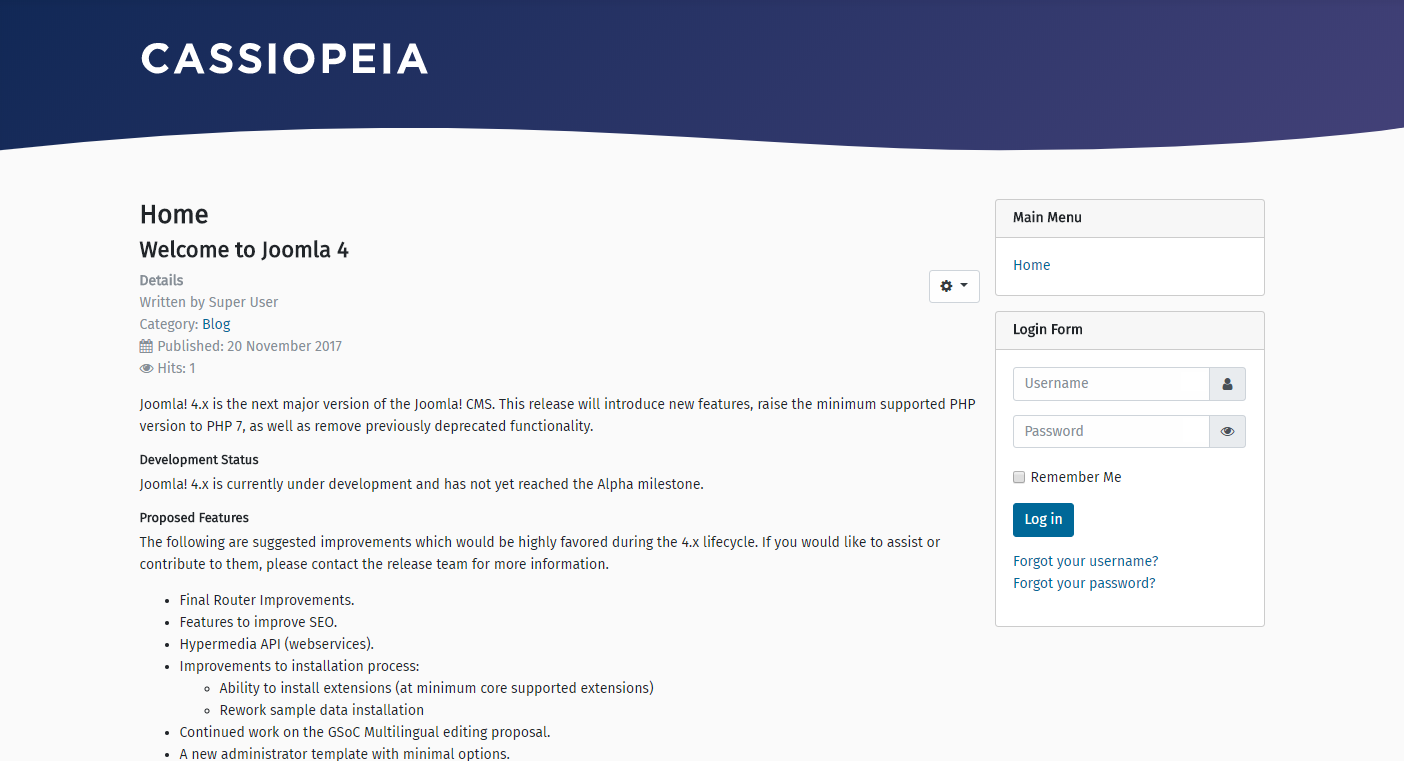 As you can see, the frontend still keeps a very minimal approach with a few contemporary touches here and there.

The Joomla 4 Dashboard has been greatly overhauled. The major point is the removal of the top horizontal bar which has been relocated at the left end of the screen sporting a menu using slide ins and outs. 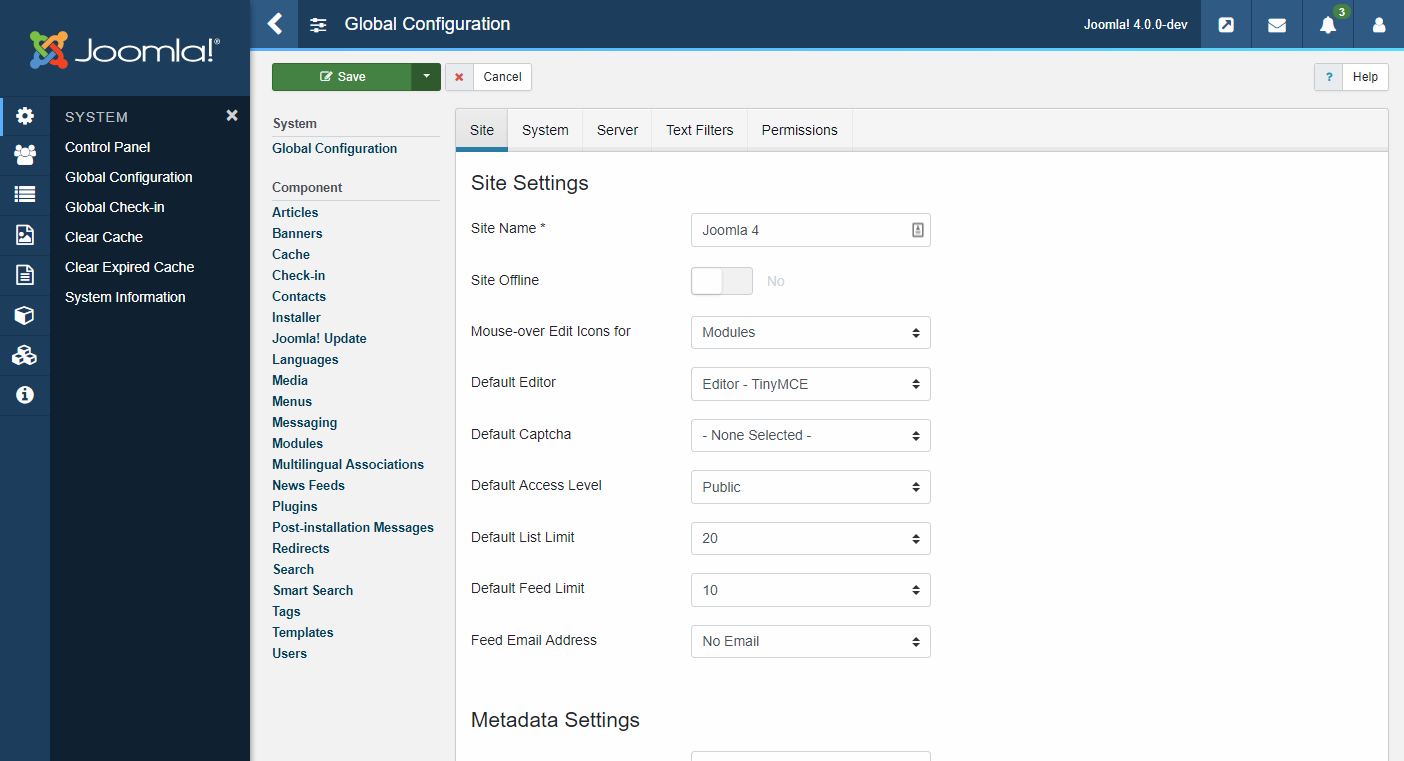 The Global Configuration is relatively the same with J3 as much as the Options are concerned. Obviously the look and feel has been improved and we feel that this change gives a more compact, straight-to-the-point, look which is nice. 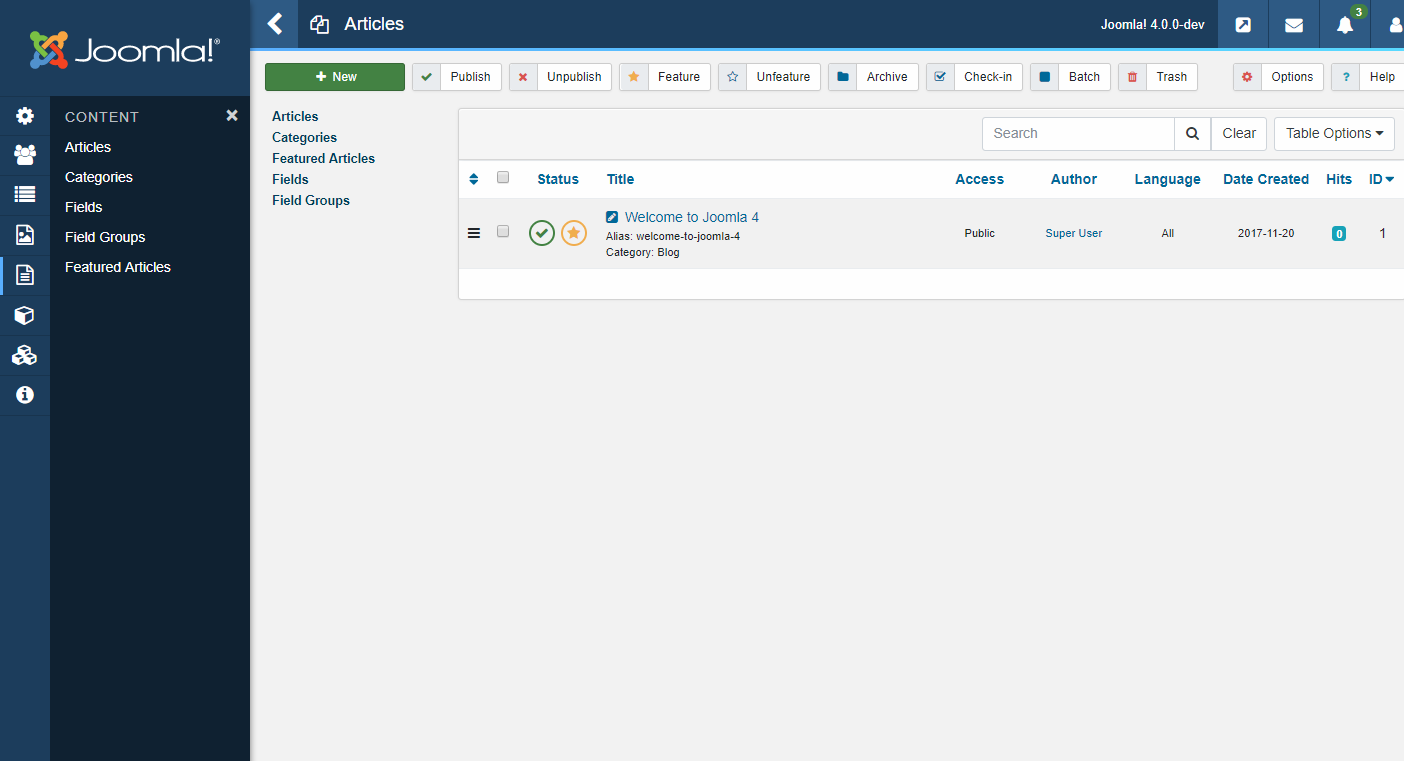 The Articles Manager has also received a fresh look and feel. Although, there is still space for a minor visual clutter removal. 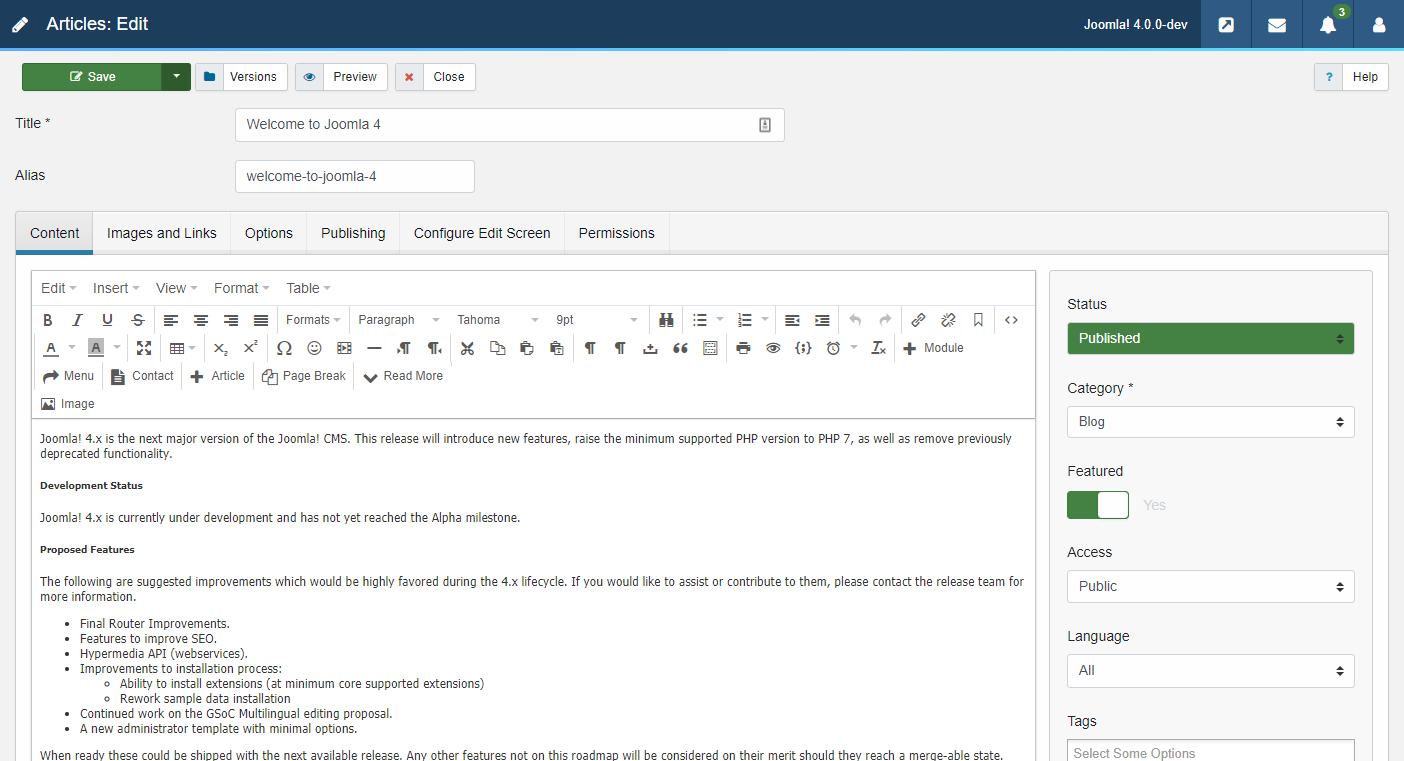 In the Article Edit Screen we haven’t seen a great deal of change apart from the slighlty changed visual layout which is already dominant in the entirety of the Joomla 4 backend. 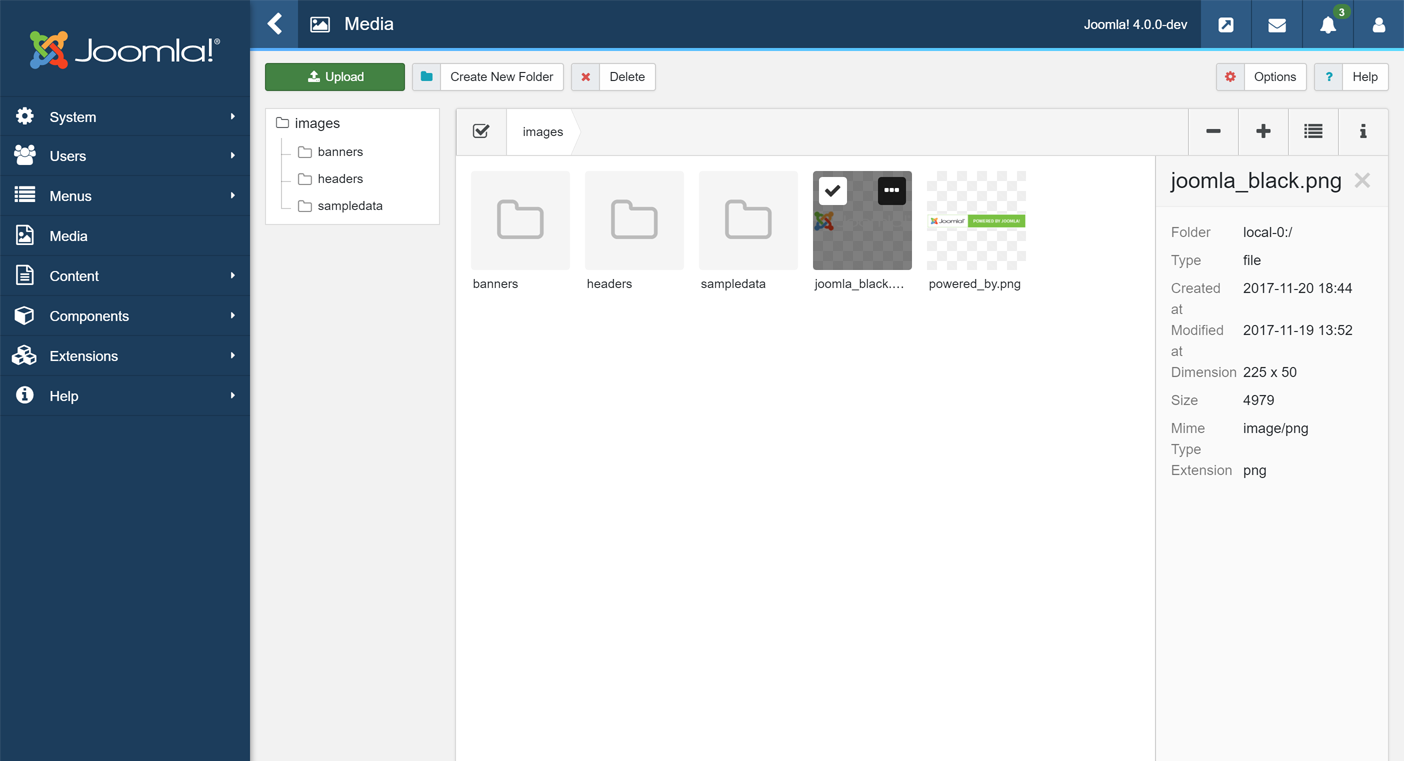 Finally, the new Media Manager is very visually appealing! This is an incredibly welcome change knowing that the amount of images and media in general has been increasing exponentially over the years, the old Media Manager just isn’t up to the task anymore.

Joomla 4.0 needs quite a lot of work still. It is still under development and the team is working towards a summer timeline with regular Alpha releases to help with the testing.